Hotter than lava flow - this printing ink can withstand 1000 °C

Tuttlingen, Germany / July 31, 2018 – A stream of red lava can run as high as between 600 and 900 degrees. And things can get even hotter in industrial settings – for example, in a ceramic furnace. Only very few inks for component-marking with CIJ printers can withstand these extreme temperatures. With this in mind, marking and coding specialist Paul Leibinger GmbH & Co. KG from Tuttlingen has introduced a pigment ink to the market, which allows a clear typeface even at 1000 °C.

Summer in Germany is well underway. And the thermometer has already cracked the 30 degree mark on several occasions. But this is nothing compared to a furnace where ceramic components for industrial applications harden – such as spark plugs, insulators and cutting tools. Inside, temperatures of up to 1000 degrees Celsius are reached – even hotter in fact than a stream of red lava with temperatures of between 600 to 900 degrees Celsius.

These high temperatures represent a real challenge for printing inks with which manufacturers mark the components even before firing. “The danger is that the ink burns in the furnace and dissolves into soot. The typeface, such as a model number, would no longer be readable, so the component would be rejected,” explains Christina Leibinger, Managing Proprietor of Leibinger. “That's exactly why we developed a new ink for our JET3up PI CIJ printer, which ensures a reliably readable typeface with high contrasts even at temperatures of up to 1000 °C.” Not only ceramics can be printed, but also metal and glass. The printing ink is now available and compatible with the Leibinger JET3up PI CIJ printer.

Heat-resistant ink is a pigmented ink. Black color particles float in a medium – unlike a dye ink in which the dye is dissolved in the medium and evaporates immediately at extreme temperatures. The experts succeeded in modifying the pigment ink’s particles and medium in such a way that they can withstand heat of up to 1000 degrees Celsius – unscathed. They also found a way to keep the particles in suspension through chemical stabilization. This slows down the so-called sedimentation process, in which the pigments settle. Additionally, the JET3up PI CIJ printer incorporates a stirring mechanism that continuously mixes the ink. “The combination of chemical stabilization and stirring mechanics ensures a reliable and low-maintenance labeling system.”

Up to 120 million characters per tank filling

The heat-resistant pigment ink is designed for the JET3up PI – a printer that marks products without contact using the so-called Continuous Inkjet (CIJ) technology. In the printhead, an ink jet, consisting of up to 96,000 electrically charged single drops per second, shoots through a nozzle. When printing, a high-voltage field changes the trajectory of individual drops, so that they end up as pixels on the product surface. The remaining drops fly into a catcher tube, and are sucked back into the continuously circulating hydraulic circuit and used there. The printing technology is fast enough to keep up with conveyor belt speeds of up to 10 m/s and is also extremely cost-effective. The CIJ printer can print up to 120 million letters with one single liter of ink.

Get in touch with our experts! 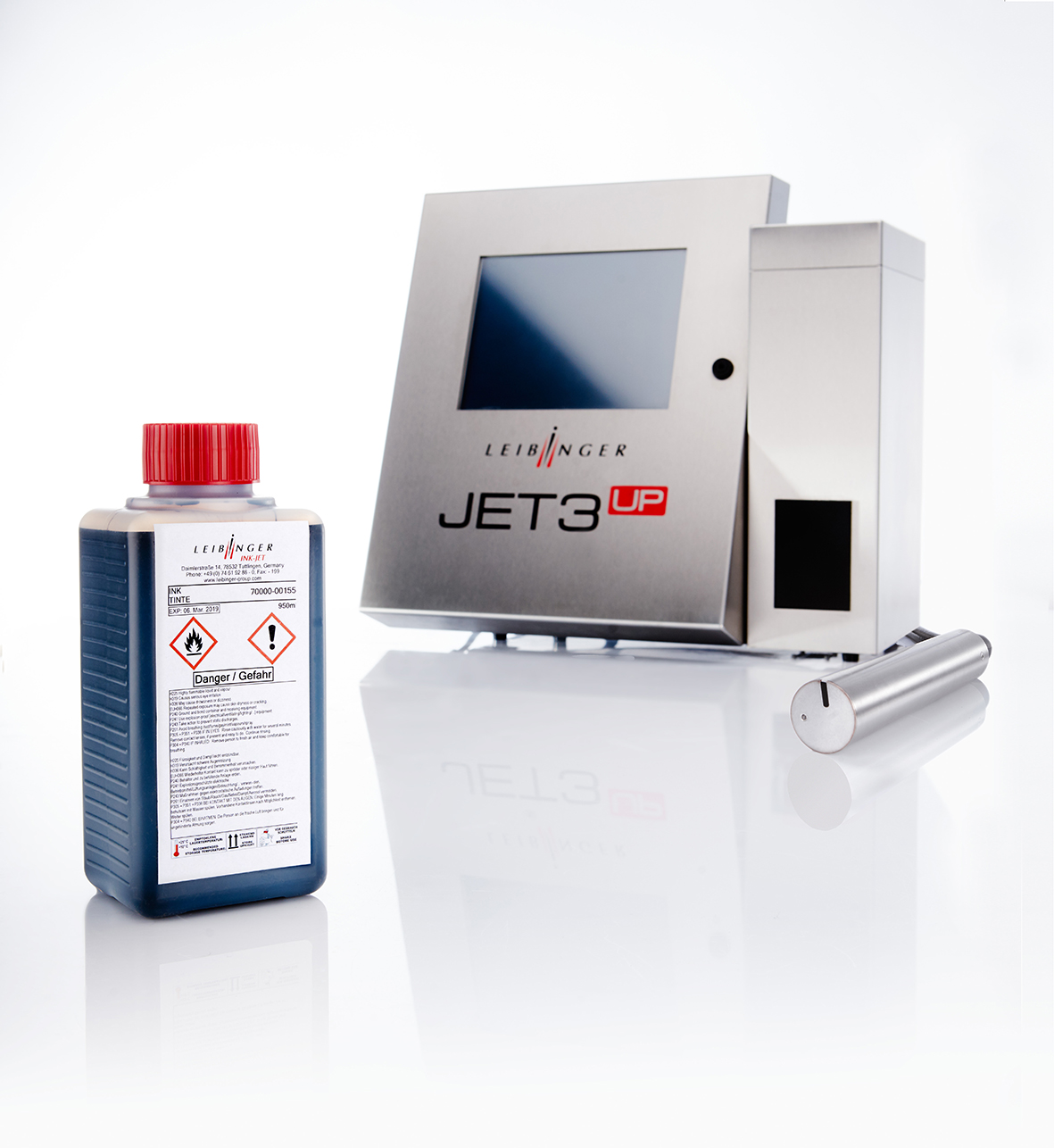 Leibinger developed the heat-resistant ink for the JET3up PI. The CIJ printer marks products without touching them.