Tuttlingen, 21.02. 2018 – Security printers will be numbering banknotes, passports and visas even more effectively in the future, since German numbering specialist Leibinger from the Danube valley developed the LENservo 12 – a numbering system that sets twelve number and letter wheels in a fraction of a second. It will be showcased for the first time at the Security Printers trade fair, which will take place in Dublin between March 21 and 23, 2018.

The euro note is a small marvel of security technology. Holding a 20-euro note against the light, the portrait of mythological figure Europa appears – a hologram that annoys counterfeiters to no end. If you turn the note around, another security feature appears: a twelve-digit security code consisting of two letters and ten numbers. To add codes such as these, printers use numbering systems that are mounted on rotating cylinders and can print entire sheets of banknotes in one go.

The challenge is that, for each rotation, the numbering systems need to set a new security code before inking – and in no more than just a few milliseconds, since modern printers print up to 12,000 banknote sheets per hour. The solution developed by the Leibinger company, which has been developing numbering systems since 1948, making it one of the industry pioneers, is the Lenservo 12 electronic numbering system.

Higher speed than a Formula 1 car

The LENservo 12 helps print shops become more efficient. All twelve number and letter wheels are equipped with powerful servomotors that operate at up to 80,000 revolutions per minute. For comparative purposes, Formula 1 engines have a speed limit of around 15,000 revolutions per minute. This means that if a banknote is printed, the servomotors set a new security code in just 80 milliseconds.

“We made sure that our new numbering systems are faster than current press models,” explains Dietmar Waizenegger, Director Product Design, who has been working for Leibinger for fourteen years. “Although printing presses will be gaining speed in the next few years, the numbering systems won’t be creating production bottlenecks.” Not only banknote printers stand to benefit from the security margin: the LENservo 12 is also suitable for security printers who apply security codes to passports and visas.

Technology that intends to survive in security printing needs to be not only fast, but also reliable. “Our new numbering systems are failsafe since our design minimizes the number of moving parts – and therefore the number of potential sources of error,” maintains Waizenegger, highlighting the system’s outstanding, made-in-Germany quality. “95 percent of the components are manufactured by our skilled workers in Tuttlingen – so precisely that the numbering systems can reliably withstand the high demands of three-shift operation in print shops.” The danger of overheating has also been eliminated. Although the servomotors work extremely fast, they still maintain a low operating temperature.

Another special feature is that the numbering systems can be maintained very quickly. A patented folding mechanism makes it possible for technicians to remove the cover quickly and easily. And individual technology modules such as motors and letter wheels can be loosened with just a few screw turns and exchanged in just a few minutes. All these advances enable printers to reduce downtime and significantly increase productivity.

Leibinger provides the LENservo 12 with control software it developed in house. Via a touchscreen, employees set the starting numbers for new orders. The numbering system’s numbers and letters are in the correct position just a few milliseconds later. “With mechanical numbering machines, users still have to perform this task with pegs,” explains Waizenegger. “Thanks to automation, print shops save on set-up costs and can considerably increase throughput.”

Leibinger will be exhibiting at the Security Printers Conference – an international conference in Dublin, Ireland, where security document manufacturers, banknote producers and public authorities will meet and exchange views. From March 21 to 23, the new LENservo 12 numbering system will be on display there for the very first time.

About Paul Leibinger GmbH & Co. KG
Paul Leibinger GmbH & Co. KG from Tuttlingen, Germany, founded in 1948, is a specialist for industrial marking solutions and the printing industry. The company develops and manufactures inkjet printers, numbering machines and camera verification systems to monitor a smooth production flow. As a third-generation family-owned company, Leibinger employs close to 250 people at its sites in Tuttlingen and Baden-Württemberg in Germany, and at the East Troy subsidiary in the United States. With its comprehensive, worldwide partner network, Leibinger is one of the world’s leading providers in the coding and marking industry. 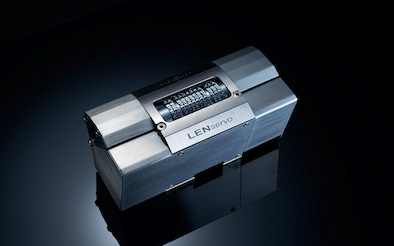 The new LENservo 12 numbering system: the servomotors of the twelve number and letter wheels reset in just 80 milliseconds